I’m going to start this by saying…this kid has fans, and I still don’t know how.
Seriously if you are a fan of Chad Future (that cannot be classified as a Koreaboo) please enlighten me as to what you see in him because I’m about to give you all the reasons he needs to stop what he’s doing and reevaluate! 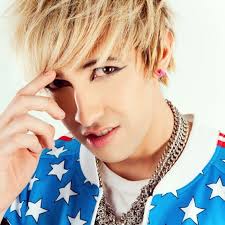 Before I do though let me tell you who Chad Future is.
Chad Future, born David Lehre is a “singer” from Michigan, now residing in Los Angeles that is attempting to form a genre he calls American K-Pop. Typically he does English covers of popular K-Pop songs but he has done a few original songs as well. His English covers on YouTube are where he has garnered most of his fans, and probably most of his anti-fans as well.
I have seen who he is and followed him for a while now, I have given each video and track he releases a chance but all I see when I look at him and listen to him is nothing short of a gimmick; and a self-made gimmick at that!

Before I dig into him and his music, let me just say American K-Pop, in my eyes and in the eyes of most of the people I’ve spoken to about him, is not a thing. K-Pop can transition to America the same way it can to Europe or Africa or Antarctica even. But there is no AMERICAN K-POP. The K in K-Pop is for Korean as in from South Korea and the Korean Peninsula. It does not come from America…if it does, it is simply American Pop, especially when sung in

English. Besides that Korean Pop music is rooted in American Pop, so if you want to create American K-Pop you are actually creating AKAPop. AKA Redundant. Now while Chad does switch back and forth between Korean and English in his original songs, it feels like what he does – a gimmick. It doesn’t sound right – it sounds almost cartoonish, like a poorly done caricature. Now before someone says it, let me get this out there! I don’t think he can’t be in K-Pop because he is White – that is some of the argument I have seen against him and that is clearly not my viewpoint. Keep reading and you’ll see what I think. I have no problem with the fact he’s white; I have a problem with him – in general. Just him!

Now let’s dig.
I understand wanting to emulate the people you are a fan of, I do it too. But there is a difference from dressing like someone or putting on winged eyeliner versus trying to become a whole new person and race. From what I see Chad is taking everything a step too far and fetishizing Koreans – placing Korea and their culture & music above everything rather than putting it on an equal footing and respecting it as a fan. I have an immense problem with fetishization and the role it plays in cultural appropriation, in fact I wrote my thesis on it last year in reference to American and Korean music industries. You bet I had a portion on Chad Future in my paper. A friend of mine on the topic said, “The problem with Chad Future is that he isn’t being himself. He is trying to be this idol or that idol. He shouldn’t be trying to be a K-Pop star; instead he should simply try to be a pop star with a K-Pop influence.” He has gone past the point of trying to emulate someone, he is trying to be someone he isn’t.

Next issue I have with this guy, he simply isn’t very good! I have been singing my whole life – various choirs and voice lessons for as long as I can remember – I know proper singing techniques thus I think I can actually criticize him. He doesn’t actually know how to sing or even rap properly. All I hear from him are shallow breaths that can’t support the sub-par, poorly written raps he thinks are so clever. His voice often just reminds me of a middle schooler attempting to sound older – as does his general look and fashion choices.

Speaking of poorly written raps though, let’s talk about some of his lyrics. (If you can call them that)…

June of 2014, he released a song called Got It Figured Out featuring Aron, a member of the K-Pop group Nu’est. At one point in the song he actually says –

Okay but what? Child please, just cause it rhymes, does not mean it’s any good! Believe me when I say it just took me a long time to pick out what was the worst lyric in this whole song – the entire thing is bad!
Another top contender was:

…you have yet to prove to me you are cool, Child.
Relating to lyrics but not quite about them I have another reason to dislike him! I mentioned in his introduction that he gained some recognition for K-Pop English covers. In fact, this is where little ol’ K-Pop fan Thia Rose (I mean me) heard of him. Last night he released a new cover of VIXX’s new track Error, you may remember it, I featured it in a Sound Up Sunday. Anyway, I gave this song a chance (mostly because this track features Josh Golden) hoping for something better but instead my ears were met instantly by his poor rapping skills and poorly reworded lyrics. At least Josh Golden’s part was sung flawlessly – so I guess there’s that. But this leads me to the problem I have had with him since I first heard him. His English covers completely disregard the integrity of the song! I 100% understand with translating something from Korean to English there will be room for error and you will need to change some words to make it fit and sound appropriate and at the very least grammatically correct. However if you are doing an English cover do NOT change the integrity and the meaning of the song! Thus I give you his cover of B.A.P’s One Shot.

Very few lyrics said in this song are true to the amazing original song by B.A.P – read the lyrical translation here and you’ll see what I mean. Essentially what Chad and his companions kept the same are the lyrics that are already in English and changed everything else. To me it feels like they were thinking “Americans won’t know what this means anyway – so we can say whatever we want.” That is an insult to me, my intelligence and my life as B.A.P fan. You know Mr. Lehre and companions- I may not speak Korean fluently, but I speak enough to understand the gist of this song and you changed it! I’m still trying to figure how they didn’t include Zelo’s iconic line about how people need to stop being a slave to laziness? Everything in his English “remix” is self-serving, it is not inspiring to the listener as I assume Bang Yongguk intended to be.
One Shot is by no means the only song with which they have done this either; maybe I would be less bothered by it if it was.
In his cover of EXO’s Overdose the chorus lines of;

are kept the same but little else is as less than 30 seconds passed that it all changes meaning, I really don’t recall EXO ever saying anything about the girl’s eyes, or thighs, or even calling her “fly” to this I say Chad Future, just stop. EXO attribute the girl to being like poison but they do not make it sexual as Chad seems to try to do. He fails, by the way.
Have I illustrated this point enough now? I have more to make.

The final reason I have immense problems with Chad Future?
He seeks out his haters.

A friend of mine sent me a video he posted once in which he was replying to hater comments. Now most YouTubers make videos responding to comments – that’s nothing new. However those comments typically come from their other YouTube videos or their personal blog posts; that is entirely normal. Not for good ol’ Chad! He was responding to people’s original posts on Tumblr and Twitter or things that simply weren’t sent to him. Posts that he would only find if he was searching the tag of his own name. He’s a fame digger, and searching for his own haters to call them out. I’m just going to call that pathetic.

Well Chaddy-Boy, you have my full permission to call out my blog and take my comments to one of your videos with your Higher Than A Kite friend (seriously if that boy wasn’t high….he should probably see an optometrist!). I honestly would love to go toe to toe with you on all the reasons you need to stop; I doubt you will take me on though.

Seriously though, have I illustrated why I dislike this kid enough yet?
Do you reading this still have no problems with him? I would love to hear from people – What do you think about him? I think I’ve made my opinion pretty clear.
Your turn?